A Halloween to remember 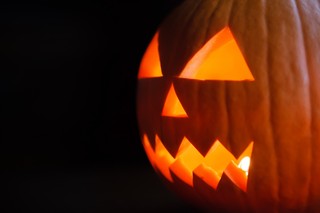 The Halloween when I was eleven, my folks were as broke as Job's turkey, and my younger brother and I knew we were on our own for costumes. He picked the venerable sheet-over-the-head with the eye holes cut out, but I wanted to be an alien (the Outer Limits TV show was my favorite).

I found an old ping-pong ball in my dresser drawer, which I meticulously cut in half with my Cub Scout pocket knife. Then using the same knife I cut a dime-size hole in each side, drew red squiggly lines on them, and inserted them into my sockets like monocles. Bingo, bug-eyes. Then I took an old eyebrow pencil I fished out of the den wastebasket and drew scales on my face. So far, so good. But what about a ray gun? An alien needs a ray gun. I scoured the house, and finally found an old turkey baster in a drawer.. I taped a wooden handle to the bulb end and glued some blue buttons down each side. Finally I was ready to unleash havoc on the hapless planet.

My brother and I left to make the rounds, but as we did, a strange thing happened. As we went to each house, every woman who answered the door would point at me and laugh helplessly like a lunatic, even going so far as to get friends in the room to come over and take a look. That ticked me off to no end. Wasn't I scary? wasn't I intimidating? Stupid Earthlings.

Two hours later my brother and I were done and home. I was in the process of sorting my loot on the floor when my mom walked in.

"How did you make out?" she asked.

"Not bad," I said. "I even got a couple of popcorn balls from old Mrs. Toomey. Those are always good."

Then my mom stopped dead in her tracks, and with a trembling finger pointed at my gun, her face ashen. "Where ... did you get THAT?"

"This?" I replied airily. "It's just an old turkey baster I found lying around."

Only she told me it wan't a turkey baster. It was her ... woman's tool ... that she used to clean her nether regions.

I hadn't even known such a thing existed, and wouldn't have touched it if I did. No wonder all the neighbor ladies laughed.

Needless to say, that was the last year I went out.