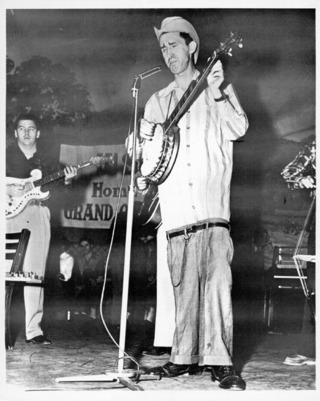 I'm a child of the sixties/seventies (graduated HS in 1970), but it takes stuff like looking through my old annual to remind me of how utterly ridiculous the fashion sense (?) was in that benighted decade. Now that I'm an old dude past sixty, I wonder if when I'm eighty I'll likewise look at pictures of current clothing with equal horror.

I'm going to say yes, but qualify it with the fact that some of what today's flaming youth is sporting is downright hilarious. To wit, the blue jeans with the shortened legs, hung low so the wearer's underwear-wrapped bony hinder is paramount.

I see these sideways-hatted lads waddling penguin-like down the street, and two thoughts come to mind. One, I hope these kids never have to suddenly run–-say, from a cop–-because they wouldn't get two steps before doing a faceplant on the sidewalk. And two, for all their up yours, tough guy posturing, they look very much like the old "Stringbean" character from Hee Haw.